I'm not even sure whether i should pen this down but I just had the most fucking weirdest dream ever.

I dreamt that I was in Aunt Ah Ling's house with her son. Her son is quite the accomplished person, already earning around 4k in his early years. Now he started acting (in my perception) patronizing towards me and stuff and since we talked about how he can be prideful sometimes i whispered in his year that he is too prideful and all of a sudden it erupted into a full scale argument with me telling him that there are loads of people better than him or what not and all of a sudden it's all about revealing dark secrets in each other's family and god for some reason I actually dreamt about a very screwed up secret on my family's side being revealed and due to it's magnitude i decide not to pursue that matter any longer and have him and me apologizing to everyone and stuff.

My god that is such a mind freak. I had to write without punctuation because it's a dream sequence and it's way to surreal to fit into a grammatically perfect paragraph.
Posted by Vincent at 18:57 No comments:

Meditation 1a: Hypocrisy is the Compliment Vice Pays to Virtue

I'm going to go ahead and assume, with my limited knowledge, that this statement means: When you are paying a compliment to those with a virtue while you yourself embody the vice that is the exact opposite of that virtue, you are being hypocritical. I am guessing the meaning of this quote w/o referring to official sources, but this is what i think it means.


Regardless, that'll be the title of this post, which deals with hypocrisy. Specifically, I'll talk about the most screwed up form of hypocrisy - the one where you internalize the hypocritical values that in truth you do not have. I'll deal with outward hypocrisy (or hypocrisy when dealing with people) in another post, as there are many reasons leading to it and differing ways to solve it.


How Does it Happen?
It's not hard to explain how hypocrisy is formed. It is what happens when you 1. want to do something or 2. have a value system that is at odds with a. the societal norm or b. someone you don't wish to contradict. To prevent any forms of conflict, you assume the value system/execute the action in tandem with the societal norm or the person in question. Take filial piety for instance. You are not a filial person but when facing societal norms, you internalize the value - but it is a very superficial internalization. You'll say to yourself: 'I must be a filial person because this is what society requires of me and this makes me a good person' but in truth you don't give a fuck about it. That's hypocrisy...or when you're jealous or don't really care about a friend but you tell yourself: 'I want to be good to him because that makes me a good friend'. In truth, you do so because you either envy him but he has something that you want or he is better/more powerful than you. That's hypocrisy.


Why is it bad?
Why is it bad then? I mean it's a very good system that prevents you from coming into conflict with external pressure and it's the best way to smoothen the two out without serious internal conflicts. Well, the main reason is simple : hypocrisy is lame. I don't have that high an opinion of many Christians but I'm going to quote a story from the Bible, whereby Jesus attacks the pharisees who extol certain virtues in public but indulge in their vices in private.The general idea of this piece is: why compliment a virtue when you can embody it? Since certain virtues are so good that the societal moral gravitates towards it and great people embody it, why make that your artificial side when you yourself can make yourself an exemplar of that value? Internalizing a value without much thought is laziness. You take in a value or attitude before thinking why it is actually good for you.


The thing about internalizing values and attributes which you don't really like deep down is that it brings about various consequences. The first thing is you'll feel very bad while adopting that value/attitude, and it's not going to last in the face of serious challenges. The second thing is, when you try to self justify your failures based on faux moral grounds (as a convenient excuse) you are, in fact, lying to yourself. The third and perhaps worst consequence is, all these things impede real character improvement ie. you'll think that you are really so when, in fact, you aren't. You do not even know why it's good for you.


How to solve
There is no quick and simple fix to the problem considering that there are so many factors leading to such a trait in one's life. If one decides to take a quick route out for fear of peer pressure or societal norms which are at odds with what he clearly wants, then he is internalizing hypocrisy.* The essence of preventing the internalization of hypocrisy is simple in principle: If a certain societal value is at odds with yours, carefully analyse whether it's good or not for yourself, without taking what people think of you into account (there are exceptions of course, such as the anguish of a friend or the hatred of an enemy). If it's good, then try hard to get rid of what you have at the moment. If not, then to hell with what other people think. One cannot satisfy everyone in this world. Document and think deep about every conflict that arises between your actions/values and that of the society's.


The above can also be applied to self-image. Do not pretend to be responsible and mature when you are not. To repeat, if you think that it's good, you should try to embody that characteristic, otherwise, well, fuck it. By artificially embodying it you are depriving yourself of a chance at self improvement.


Summary
There is a very thin line when straddling between hypocrisy and the internalization thereof, and this is a trait in many people. However, always in life, one must understand that hypocrisy, when internalized, prevents the development of true character - and this is perhaps the main argument against hypocrisy.


*There is a saying by Plato/Aristotle/Socrates which says that one can only trul
** Next up: resilience, greed, and self-discipline
Posted by Vincent at 02:09 No comments:

This blog was intended to express my feelings and thoughts on some matters but it is fast becoming some kinda movie review website. Nevertheless: 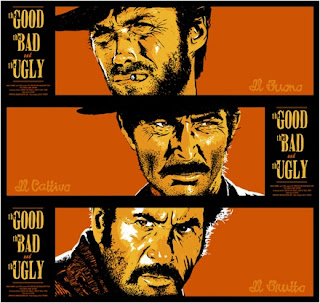 Yes my friends, the greatest western epic to be made by a non-American, which is also the best western epic ever. Sergio Leone's the Good, the Bad and the Ugly is now considered a classic, and I believe that an American director will never have the kind of vision that he has. This is not because of their intellect or cultural training - rather, I think it has something to do with their cultural background. I think Leone, as an Italian,  distinguishes his western (aka spaghetti western) from other westerns due to the inclusion of epic themes (war) as well as a sweeping musical score.

Now, let me put out a disclaimer: I must say that this is not your typical 'deep' movie. You won't see deep moral messages or nuanced reflections on the state of the human psyche. Rather, it is a movie that gives you pure enjoyment - the kind of enjoyment which you can't find in the bumbling special effects of the Transformers trilogy or the soapy operas that are some Harry Potter films. Rather, it succeeds to impress through brilliant characterization, a strong, attractive storyline and the inclusion of the themes of war. There are two especially memorable characters in the film that I wish to mention here: 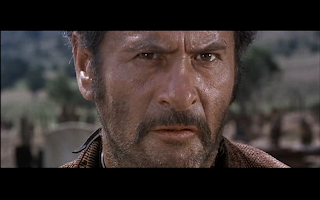 Senor Tuco Benedicto Pacífico Juan María Ramírez, also known as The Ugly, is your simple run-off-the-mill bandit at first sight. He has no set rules that he lives by. When we are first introduced to him, he had killed, raped, pillaged, divorced, robbed, stole - simply put, every crime that you've heard of except treason was on the paper that the executor read out to a mob of fearful peasants before Tuco was hanged. Also, he tried to kill our protagonist twice - once by trying to strangle him with a rope and once by trying to walk him to death in the desert. Both scenes are equally sadistic and he relishes in it. And yet, when at last  we see him running towards his destiny - 8 bags containing $200k - with Ecstasy of Gold blasting in the background, I can't help but feel happy for this son of a bitch. He did a lot of bad things but deep down we really feel for a person whose unfortunate circumstances shaped him into what he is today. The scene with his brother and the interaction scenes with Clint Eastwood's character are to be credited for this. 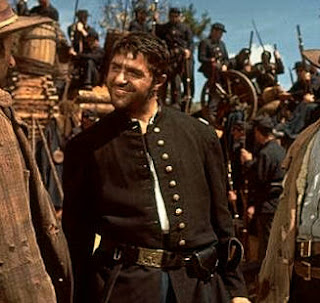 The Union Captain. At the start, we were treated to scenes of Union victories and the Confederate armies retreating, but it is the Bridge Scene that carries the most gravity in the film when it comes to themes of war. It aims to show the pointlessness of conflicts, regardless of outcome. To me, that's the unofficial climax of the film. The union captain was introduced as a drunk soldier who jokes around with 'Blondie' and Tuco about things that his men were very serious about. He literally swaggers into the scene in the midst of disciplined soldiers and the onset of another melee. But then he says: 'Whoever has the most liquor to get the soldiers drunk and send them to get slaughtered, is the winner'. This is followed by him pleading the two 'civilians' to blow up the object of the melee between the two armies to stop the pointless bloodshed.  His death followed swiftly, but not before he saw his dream come into fruition - the end of the pointless melee, whereby 'so many men were wasted so badly'. As the bridge was blown up, the second part of 'fine di una spia' plays while the captain smiles trimphantly before his flame was snuffed out forever...


Yup that's it. Once again, the good, the bad and the ugly is not an arthouse film, but with all the elements of a good movie, it succeeds in impressing the viewers. It's definitely one of the best movies that I've seen in a while. Oh, and Ennio Morricone's filmscore - bloody hell, it's brilliant. Right up there with John Williams'. I'll be setting meself a new ringtone soon.


Oh, and a new quote: People who do great things normally set out to do something greater. That is perhaps the case with Sergio Leone.

Vincent
A website for my personal reflection on issues.